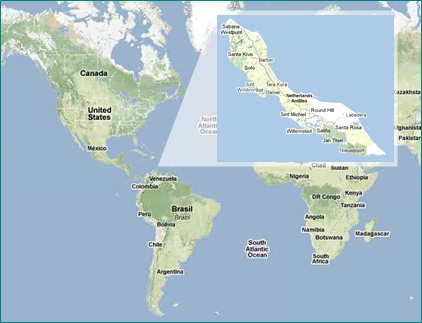 The island lies about 60 km from the mainland (north of Venezuela and north-east of Colombia).

West of Curaçao is the island of Aruba, which belonged to 1986, also part of the Netherlands Antilles, east of the island of Bonaire.

South-east Klein Curaçao, a favorite for divers uninhabited island where the lighthouse is only one.

The islands of Aruba, Bonaire and Curacao are called together on the basis of their initial letters as ABC islands.

Curaçao is located in the direct sphere of influence of the northeast trade winds. Since the island is too shallow slope for rain, bring the air mass is relatively little rain to the island and as the rainfall in Curaçao not be regular, there are no permanent rivers on the island. It is a semi-arid climate with a daytime average annual rainfall of 550 mm and an annual average of almost 28 ° C. The annual rainfall with ranges between 200 and 1200 mm, however subject to very strong fluctuations.

Highest elevation is the Sint-Christoffel Mountain.

Geography and climate in Curaçao

The population and languages on Curaçao

The capital of Willemstad

Diving and snorkeling in Curaçao

Accommodation and catering in Curaçao